Based on our experience of helping over 250 physicians since the inception of GMR Web Team reputation management software RepuGen in 2016, we have noticed a fairly consistent Net Referral Patient score. However, there is a lack of correlation between Net Referral Score and physicians’ online reviews. This could be because unhappy patients are more likely to vent their frustrations online vs satisfied patients posting a positive experience online.

There are four primary goals of this report:

How Do Patients Rate Their Visit to Primary Care Center Office Based on Their RepuScore? *Repuscore is the score given by patient on a scale of 0 to 10 when asked their likelihood of recommending the physician based on their experience of the last visit. 0 means will not recommend and 10 means will recommend.

Given that the primary care centers in this study were using GMR Web Team tools to address patient complaints, it is not surprising that the likelihood of recommending the physicians has seen a slight increase above the already high levels of the benchmark study. This also validates our view that paying more attention to patients' experience is the key to getting more recommendations from patients. The increase in positive ratings suggests that the efforts by primary care centers to address their patients’ concerns are paying off. A decrease in neutral and negative ratings shows higher percent of patients rating their experience as positive vs. last time. Primary care centers have to compare their individual scores with the overall numbers to identify areas for improving patients experience when they visit their office. Patient Sentiment Analysis after their visit:

Patients are asked to explain their reason for rating their visit the way that they did. GMR Web Team analyzes sentiments and its intensity based on the comments, using an artificial intelligence tool. As there is a decrease in the number of happy patients, primary care centers should make sure to evaluate their scores to identify any potential reason for increased dissatisfaction. Centers should also consider bringing up some programs to increase patient engagement and satisfaction. An increase in trust data and a slight decrease in angry data is a positive sign for primary care centers. Primary care centers need to identify patients who showed high intensity and launch a campaign to convert them to advocates for the center. There is room for improvement of intensity for physicians for solidifying their relationship with patients. Since majority of the patients showed medium intensity, physicians should work on establishing trust between them and their patients. Word cloud analysis uses the frequency of words used by patients and picks up the most used words. Size of the word denotes frequency in the chart above. Frequently used words by satisfied patients should resonate a positive sentiment, and thus could be used to build expectations for new patients, knowing fully well that it will resonate and that the practice will be able to fulfill the promise. An example could be making a bold statement like Listens, Caring, Friendly, Professional – these are the most used words that patients use to describe their visit. Frequently used words by unhappy patients allow the primary care centers to gauge patients’ reasons for dissatisfaction. However, given the fact that the comments of patients were detached, we can assume that appointment, wait time and hours were among the major concerns. These words are more relevant when linked to the patients (which GMR Web Team account holders can do), and also when analyzing the complete review written by the patients.

Why is the Primary Care Patient Satisfaction Benchmark Report So Important?

Online reviews and recommendations from existing patients are the best source of new patients for primary care physicians. In-depth analyses of patient experience helps physicians identify their strengths and weaknesses, giving them the knowledge to make positive organizational changes.

Understanding the patient sentiment and its intensity provides insight into the patients’ mindsets after they leave the office. Physicians can use the information to improve satisfaction and brand their practice consistent with the positive sentiments generated by their service. 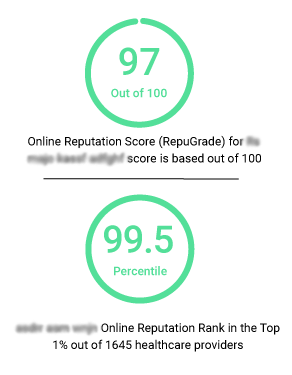